Posted on 28 August 2021 by catholicsensibility 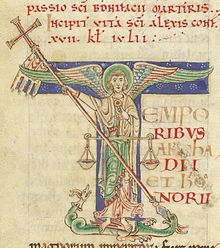 I was reading about two bishops. One is encouraging Pope Leo’s St Michael Prayer, and the other is forbidding it. The last time I had this discussion in person, we pondered the request that came in. I observed that it was likely to be a frustrating thing for its advocates because the parish tended to chattiness at the end of Mass. I didn’t think the devotion would stick, especially since the pastor preferred to be greeting people after Mass and wasn’t inclined to lead it or endorse it personally.

My suggestion was to ask for intercession on September 29th. But I think a faith community would do well to get serious about it. A novena couldn’t hurt. Once through the litany on his feast day, as a minimum.

For a people really serious about Michael the Archangel, would they be willing to take a deeper step?

My thinking is that lacking some commitment with courage or sacrifice, why would the being attributed to lead the forces of good into battle against evil want to give a bunch of earthbound mortals a second thought? Especially if all they want to gain out of this was a bit of showy prayer that wouldn’t necessarily be more effective than a Matthew 6:6-8 moment. Soldiers need discipline, and St Michael always impressed me as something of a drill sergeant. If he’s trampling dragons and demons, he’s certainly not above giving a head slap to an impertinent human.

Todd lives in Minnesota, serving a Catholic parish as a lay minister.
View all posts by catholicsensibility →
This entry was posted in spirituality. Bookmark the permalink.

4 Responses to Season Of Saint Michael