Posted on 2 September 2021 by catholicsensibility

A new visitor takes Catholic teaching to task about the God of Muslims, Christians, and Jews. It’s not a new take. The Catholic baseline can be found in Nostra Aetate, the 1965 conciliar Declaration in the Relation of the Church to Non-Christian Religions. Why did the Council have a word for non-Christians. They explained it in the first paragraph:

In our time, when day by day (humankind) is being drawn closer together, and the ties between different peoples are becoming stronger, the Church examines more closely her relationship to non-Christian religions. In her task of promoting unity and love among (people), indeed among nations, she considers above all in this declaration what (people) have in common and what draws them to (communion).

The center of the discussion is this: a search for commonality among human beings, not differences. The document centers its discussion on what Christians and non-Christians hold in common. This is a topic wide and deep, by the way.

(Muslims) adore the one God, living and subsisting in Himself; merciful and all- powerful, the Creator of heaven and earth,(Cf St. Gregory VII, letter XXI to Anzir (Nacir), King of Mauritania (Pl. 148, col. 450f.)) who has spoken to (people); they take pains to submit wholeheartedly to even His inscrutable decrees, just as Abraham, with whom the faith of Islam takes pleasure in linking itself, submitted to God. 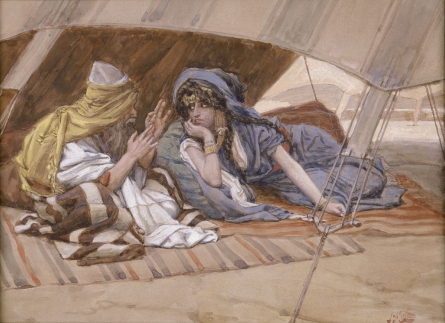 The three monotheistic religions originating in the Middle East all share Abraham as a spiritual father. Abraham (left, with his wife, credit: James Tissot – http://www.thejewishmuseum.org/onlinecollection/) was a monotheist. To adopt Abraham is to embrace a universe with one God.

As for the matter of Jesus:

Though they do not acknowledge Jesus as God, they revere Him as a prophet.

Islam as a faith listens to him. But honestly, Trinitarian faith is shared with neither Jews nor Muslims. Everybody concedes that. But the point of Nostra Aetate was not to preach what people already knew. The vector of Vatican II was to adapt for a new world in which the “ties between different peoples are becoming stronger.” What are those ties? Today they would include a global economy, shared communities in most parts of the world, politics, diplomacy, culture, the internet and its social media, and so on. A smaller world is cited–not a physically reduced planet, but the vanishing of distance. That distance is defined as cultural and technological in the main.

What are common ties between Muslims and Christians? They are these:

They also honor Mary, His virgin Mother; at times they even call on her with devotion. In addition, they await the day of judgment when God will render their deserts to all those who have been raised up from the dead. Finally, they value the moral life and worship God especially through prayer, almsgiving and fasting.

Jews and Muslims, and to a large extent Christians also, share the notion that a relationship with the One God involves an outward moral commitment to live a faith that has been internalized through grace and human experience. 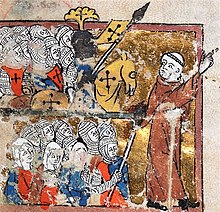 Now, some people look at the contrary witness of people who claim the mantle of religion: terrorism, colonialism, prosperity gospel, white supremacy, violent jihad, nationalism wrapped in the mantle of religion, the freer use of arms against other human beings, and so on. In that gaze they fail to see in others the values they uphold in their own practice of faith in One God. Do the Crusades cancel Christianity? The Six Day War Judaism? 9/11 Islam? Is there some Divine Judge who puts whole religions in time out for misdeed of its adherents? We have no evidence of it. God doesn’t seem to have cancelled any covenant with any of these. And surely, the crimes committed by people in the name of monotheistic religion stink to the highest heavens.

Grace still operates in individuals and communities. Fruits are evident, and many very beautiful, nourishing. and inspiring.  Others appear rotten and fetid. I think there are Christians who adopt actions, political beliefs, and social media posts that suggest they worship other gods. Sometimes this can be rather benign. Instead of Sunday worship, we tailgate at sporting events. Instead of Sunday best in a pew, we wear jerseys, caps, scarves that honor our loyalty. Instead of thuribles and banners, we wave flags and signs–even “John 3:16.” We voice anger at opponents, referees, and even our own heroes when they err. Shall I offer a litany about firearms? Money? Other Christian fetishes that would appear to be incongruent to Jesus and his values?

I cannot really use the pronoun “we” when I write about non-Christians. If Jews or Muslims converse with me, and we come to talk about faith, and they explain the grounding of their faith, I take them at their word. Church teaching (Cf. Catechism 2478) obliges me to do so.

I think many religious people fail and like our forebears in the Bible, drift off to worship golden calves, baals, and other false gods of the day. Today it might be the NFL, the NRA, a certain New York businessman. But it seems the same.

People do not always hear the One God clearly in their lives. And none, no one, not even the best Trinitarian Christian has a perfect bead on who God is and how to live best according to divine commands. On that point, perhaps we do very well indeed to recognize that commonality with every other Christian, Jew, and Muslim in the known universe.

Todd lives in Minnesota, serving a Catholic parish as a lay minister.
View all posts by catholicsensibility →
This entry was posted in Commentary, Nostra Aetate, spirituality. Bookmark the permalink.