Posted on 9 September 2021 by catholicsensibility 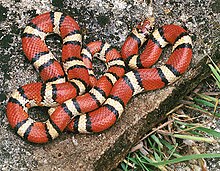 I think reptiles–snakes in particular–get a bad rap. Or is it rep? Amphibians are slimy, but reptiles are warm and dry. Human beings have a thing against things that are different. Two legs good, no legs bad–stuff like that. And yes, I know the tempter is depicted as a snake in Genesis 3, but it graduates to a dragon by the end of the Bible. One head good, seven heads bad.

One of my favorite stories from my daughter’s childhood days involved a visit to the Reptile House at the St Louis Zoo. Sneaking up behind her, I tried to imitate the sound of a rattlesnake. The young miss said loudly, “Dad! Nobody is being fooled by you. Stop with the snake noise!”

One of my favorite constellations, Ophiuchus, the snake handler and healer, is positioned near the constellation Serpens. You don’t have to be a Latin hound to know it is the constellation of the snake. Not to worry, unless you live away from a city and know where to look, this modest grouping of stars isn’t very noticeable. Like a snake in grass, not like the one imaged above, right. 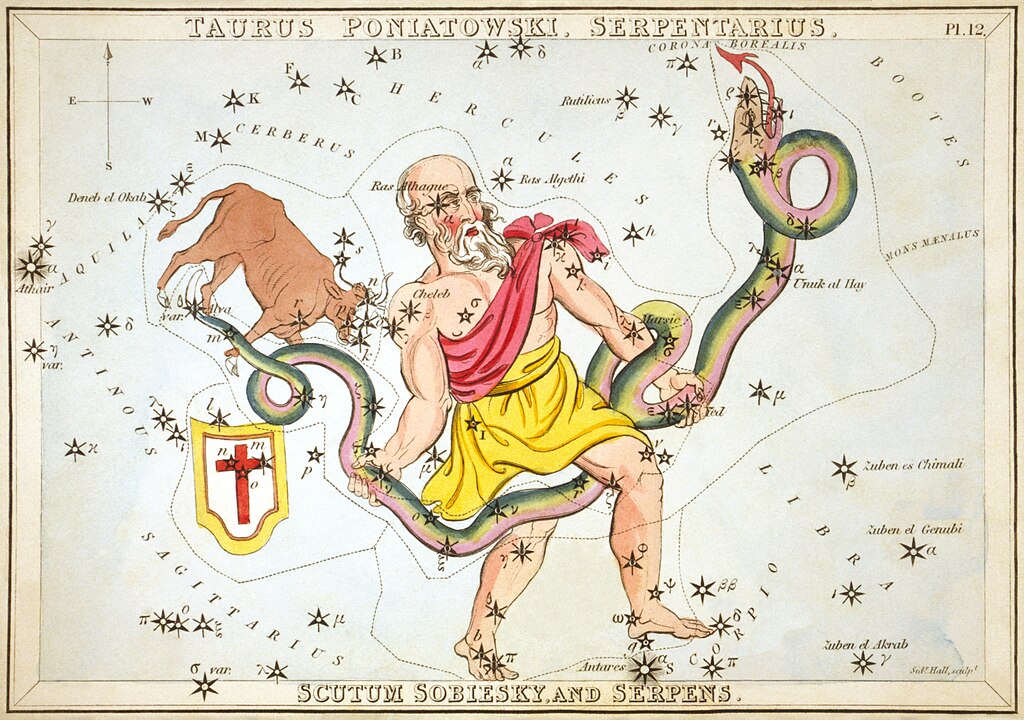 Image credit: By Sidney Hall – This image is available from the United States Library of Congress. Public Domain, https://commons.wikimedia.org/w/index.php?curid=31738706 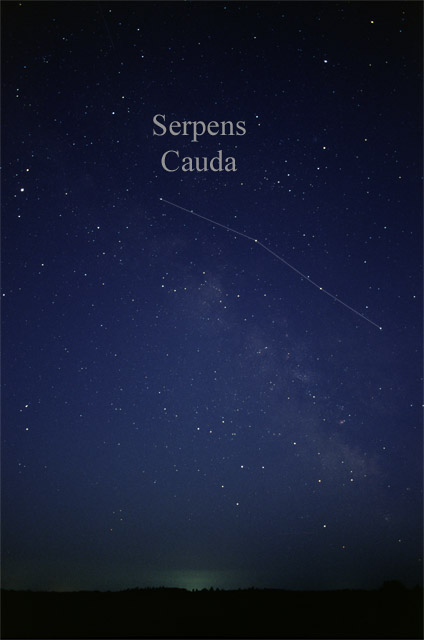 The above illustration from an 1825 collector card shows Old Man Ophiuchus holding a snake, which, in the sky, is split into two parts, like Michigan. Caput, or head. Cauda, tale. If you don’t care for reptiles still, just imagine the guy has chopped it in half. Or the Blessed Virgin has stepped on it. Whatever works to calm your stress.

Serpens Cauda is of interest, not for any stars of note–at least as seen from Earth. Till Credner’s photo, left, with constellation lines drawn in shows how subtle the formation is the midst of other stars and constellations. (Credit: AlltheSky.com, CC BY-SA 3.0, https://commons.wikimedia.org/w/index.php?curid=20041942)

One of the most famous objects in this grouping is not a star, nor is it a planet–though we know of several orbiting Serpens stars. No, it is a magnificent nebula dubbed “Eagle.” Rather fitting that an eagle would snatch a snake by the tail, don’t you think? An impressive shot from ESO (http://www.eso.org/public/images/eso0926a/, CC BY 4.0, https://commons.wikimedia.org/w/index.php?curid=7338740)  is below, where you get the Eagle shape of the cloud: 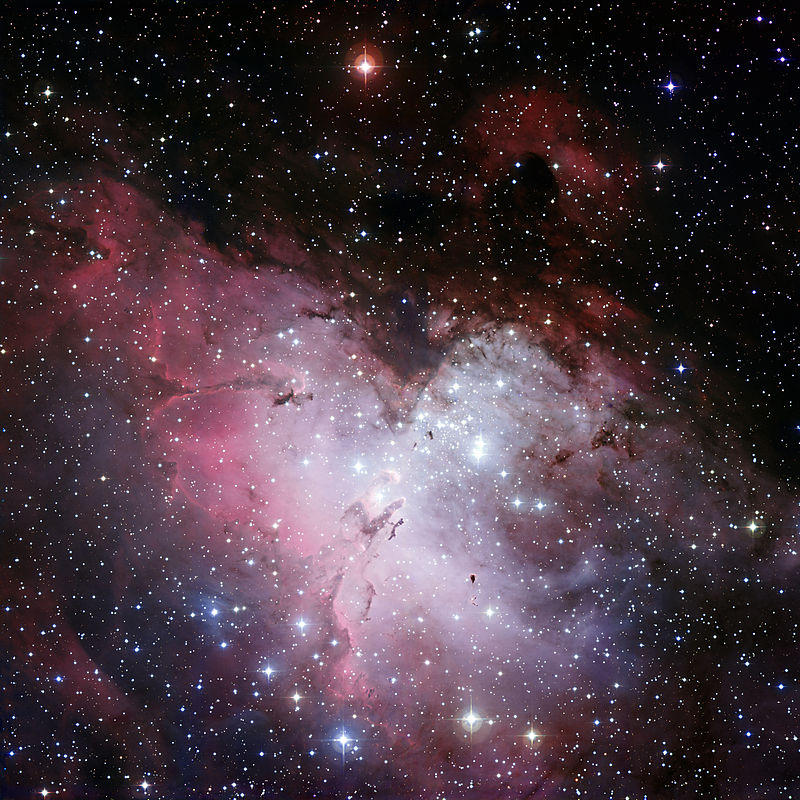 A newly enhanced image of its central region is here. Just a caution here … astronomers do not colorize space photos for the impact–though the colors do draw a bit of breath. Different filters draw out the chemical composition of deep space objects to understand what makes these clouds, stars, and such. We can discern gases like hydrogen and oxygen in space, and other elements like sulfur and sodium. It helps understand the chemistry and physics of star creation. Even from countless trillions of miles away. And it does make for a pretty picture.

The famous Hubble image is this, which you may have encountered: 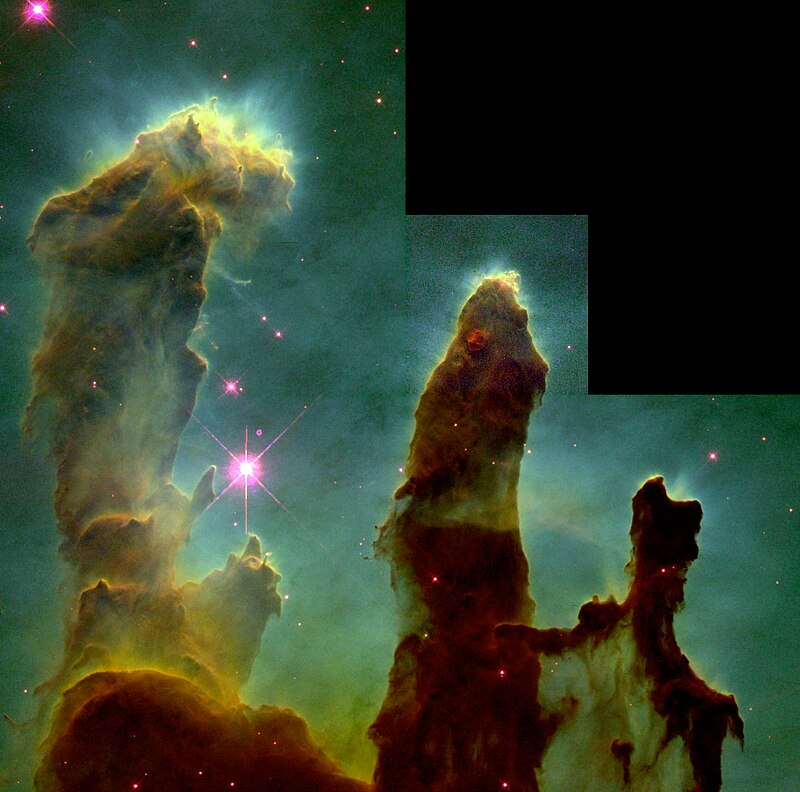 Ah, the Pillars of Creation. Not of the universe, only of new stars in this region of space. Those dark pillars house embryonic stars which will eventually absorb or blow off their gas wrappings. The whole Eagle Nebula is about 420 trillion miles wide, by 300 trillion deep. Just to give a sense of perspective, the fastest interstellar space probe humans have launched is currently Voyager I. If that little craft were to make it to the Eagle, it would take about one-and-a-half million years to traverse the long way. Not to mention it would take over a hundred million years to get there in the first place. By that time, the clouds would be long gone–only a cluster of stars with planets would remain.

Quite a lot for a modest collection of bright lights. Don’t fear the snake.