Posted on 24 September 2021 by catholicsensibility 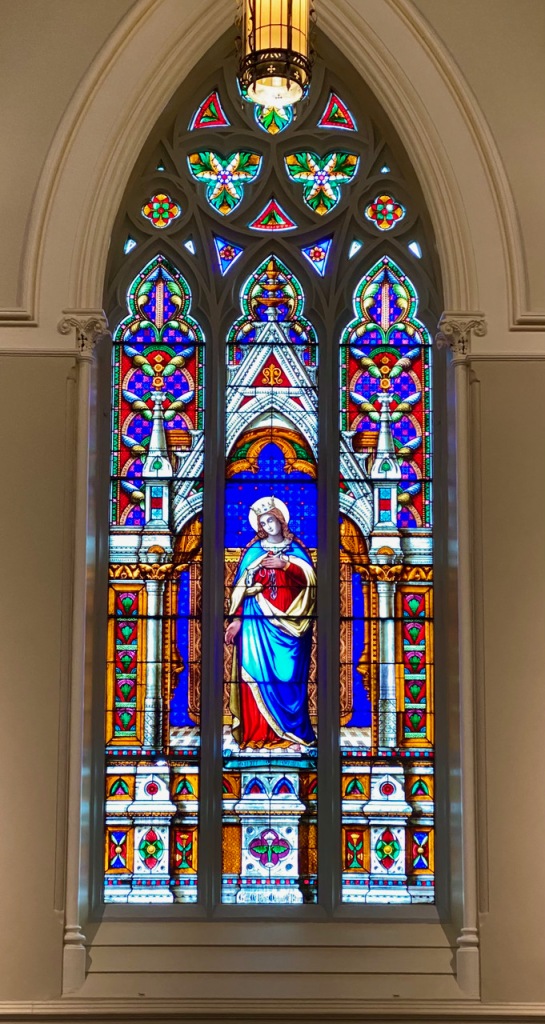 Liam sent me this image he captured at Holy Cross Cathedral in Boston. From his message to me:

​These are enameled (painted) glass windows are from the Thomas & John Morgan Studio of New York, which often worked with Patrick Keely, the designer of the cathedral. Unlike St Patrick’s in NYC, Holy Cross Cathedral’s glazed window program was almost entirely in place within a few years of its dedication in 1875, though the sanctuary windows were late replaced by medieval (meaning each piece of glass came from a sheet that was kilned with chemical to be intrinsically a given color) stained glass by the renowned Connick Studios of Boston, the great American exemplar of the recovery of high medieval stained glass technique. (Enameled/painted glass became the norm by the mid-15th century for a variety of technical and aesthetic reasons, and remained predominant until the latter part of the 19th century).

The Blessed Virgin under the title of “Mother of Mercy” is well on the Catholic tongues that pray the Salve Regina. There is no major liturgical feast in the Roman calendar. Our Lady of Mercy is observed today. In Vilnius, the Lithuanian capital, there is a special Sunday observance in mid-November. With mercy on the ascendancy in the Catholic spiritual firmament these days, I’m surprised some connection of Mary and Mercy hasn’t somehow been raised a bit higher on the spiritual consciousness.

Todd lives in Minnesota, serving a Catholic parish as a lay minister.
View all posts by catholicsensibility →
This entry was posted in Art, Other Places, Saints. Bookmark the permalink.

3 Responses to Mary and Mercy