Posted on 27 September 2021 by catholicsensibility 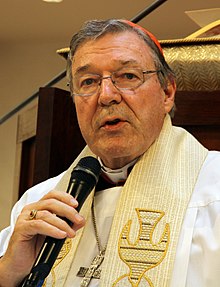 I read a brief check-up on Cardinal George Pell on the Crux website. Speaking for myself, I knew little of the man when he was appointed to the Vox Clara bureaucracy in 2002 or 3. He was part of that group that tinkered with the work of ICEL and the bishops-approved portions of the Roman Missal translation. In some cases making a bad translation a little worse.

He demurred hanging with progressives on climate change. Sad, that, given how badly his country has fared with wildfires over the decade-plus since his labeling of environmental concern a “religion.” I think it’s okay to have fervor for a good cause. Obviously churchfolk like the cardinal or me would like similar fervor among the clergy and laity of our flock.

I know of his legal troubles, and all sorts of sideshows associated with how deeply he was entangled in sexual abuse–some said his own, many said covering up for others. My sense is that he was a man of his times. He probably didn’t want to believe predators were as numerous or spread as much damage as they did. I can understand that victims, survivors, and allies wanted to exact whatever punishment they could on the institution. The Australian media paid for it, but not as much as the institutional church did Down Under.

Pope Francis put the Sydney cardinal to work for him to lead a clean-up of Vatican finances. That hasn’t gone well for pretty much everybody. The conspiracy theories afloat over the out-to-get-Pell movement have spread from Rome to the other end of the Earth. Cardinal Pell seems thoughtful:

“I underestimated the ingenuity and resilience of the opponents of reform,” Pell said during a Sept. 23 webinar organized by the Pontifical University of the Holy Cross in Rome, adding, “they didn’t like change, they didn’t understand what was being proposed.”

There was also “certainly opposition from people linked to corruption,” he said, although he did not give names.

Some backstory, for those not up to speed on this:

One of the things Pell did when he initially came into office was sign a contract with global firm PricewaterhouseCoopers (PwC) for an audit of the Vatican’s finances in 2014.

At the time, the move was touted as major step in getting the Vatican on the same page with generally accepted business standards in the 21st century and was hailed as a major step for the Vatican in terms of transparency and accountability.

However, just two years later, in April 2016, that audit was suspended without explanation by then-Archbishop Angelo Becciu, who at the time served as sostituto, or “substitute” of the Secretariat of State, akin to the pope’s chief of staff.

The then-archbishop is now on trial in the Vatican for embezzlement, money laundering, fraud, extortion, and abuse of office.

You’d think that a worldwide organization with thousands of parishes worldwide struggling to make ends meet would somehow be better off. The money seems big enough to be a concern for lots of people though. And I’ve heard the ordinary laity, the Church’s 99%, seem less inclined to drop a pence for Peter these days. They still like Pope Francis, mostly. They don’t seem to like the stench of money floating around the drain at the top.

You might also think that with so much fuss on Pope Francis being “confusing” that financial reform would be a fairly easy task. After all, there’s nothing much in canon law or the catechism about handling money.

I read a bit from the online Catholic Right taking up his cause with the Australian courts. A lot of their heroes have gone down to ignominy. Perhaps this was a more scarce occurrence, a man unjustly accused. Even Cardinal Pell’s theological critics admitted the sniff of injustice about the whole series of trials. Still, all the clouding of conspiracy theories these days can make it hard to discern the truth easily, like focusing on what’s behind the incense cloud or making sense of a bungled Latin translation.