Posted on 10 October 2021 by catholicsensibility

I noticed that we have two holidays tomorrow, according to the press secretary of the mean communist deconstructing our once-great country. Pick the one that aligns better with one’s politics, history, culture, ethnic heritage, etc.. I guess.

Maybe my fellow Knights of Columbus would be impressed with this acquisition from my childhood. I think it was my dad’s.

These coins were sold for $1 in Chicago in 1892. The buying public was more discerning than a modern Republican. Hundreds of thousands went unsold.

The US Mint then released them for general circulation, recovering fifty cents on their “dollar.” They are one of the few commemorative coins to hit ordinary pocket change in some numbers. A few others did in the 30s and 40s of the last century. Then the 1976 issues for quarters (and halves and dollars). And the various series of this generation’s quarters, dollars, nickels, and cents that began in 1999. 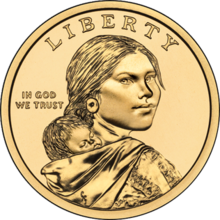 Now we have manganese brass dollars featuring a Shoshone woman. They weren’t terribly popular in 2000, and are no longer seeing circulation. Except when I ask for them at the bank. The subsequent designs–they change each year now–some of them look quite nice. Too bad they never make it to my bank. During the Obama administration, these dollars were only made available in mint sets. That hasn’t changed.

My suspicion is that the observance of Christopher Columbus will fade like Flag Day, Arbor Day, and separate presidential birthdays in February. Modern holidays supercede the explorer, even among his supporters: Super Bowl Sunday, Black Friday, naming two.

The sharing of the holiday with indigenous peoples seems okay. I wonder if the newer festivity will ever develop with a larger footprint than first contact from Spain. We’re already convinced that Columbus wasn’t the first European. And scientists keep unlocking older footprints in the Americas. Discoveries yet to come might intrigue the curious. And in another few centuries, who knows what holidays will come to the fore?

Todd lives in Minnesota, serving a Catholic parish as a lay minister.
View all posts by catholicsensibility →
This entry was posted in Commentary, Politics, US History. Bookmark the permalink.