Posted on 9 November 2021 by catholicsensibility 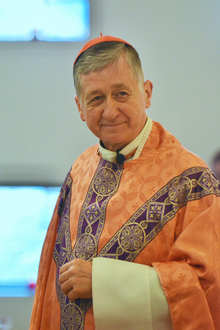 I noticed a reaction here and there against Archbishop Cupich’s brief essay on Traditiones Custodes here.

I think the initial discussion on this website garnered relatively little chit-chat in the boxes. Detractors have long set aside their visits here. Elsewhere, I’ve seen the term that’s all the rage these days: gaslighting. Like heresy, it seems some people don’t know what that means. Hint: it’s not saying stuff I disagree with.

Consequently, each bishop is to decide if and when it may be opportune to grant by way of exception the use of rituals prior to the liturgical reforms of the Second Vatican Council liturgy (Missale Romanum of 1962 and Rituale Romanum of 1952). In his letter to bishops around the world to accompany the text of TC Pope Francis makes clear that the local bishop is duty bound to take his decision in a way that promotes in his diocese a return to a unitary celebratory form.

One commentator suggested we were being “gaslit” by reformers promoting the also-loved term “hermeneutic of continuity.”

I can’t speak for other speakers, but as you readers all know, I don’t put absolute stock in continuity as a virtue. It has a selective value. When people need to take a rest. When they’ve swallowed or have difficulty in swallowing too much upheaval. It’s why I don’t teach new music at funerals. Or fight too much on some questionable repertoire. The point is to accompany mourners. Not impose my values and tastes.

Now, some will say that Catholics, especially faithful traditional-leaning Catholics have already seen enough upheaval. They need continuity. And in some cases they may be right. Suppose a TLM community has suffered the death of a pastor. Is this a good opportunity for a bishop to appoint Father Groovy? Likely not. Suppose the pastor of a TLM community is blogging about how bad non-TLM liturgy is, especially in nearby parishes. Maybe that would signal a time for a change.

In such a situation, conversion on some level might need to happen in some individuals. And so Saul is knocked off his stride on the road. So we are joined in union with the saints.

It seems clear: some future generation of bishops will continue shepherding people away from the TLM and into the mainstream of the Roman Rite. I think some people will decline to follow. Along with their pastors, they will be dead by this time next century. Only the future holds the answers. We have the past to examine. The hope for schism led by Archbishop LeFebvre to end? Dashed. The unification Pope Benedict sought in the mid-00s? Derailed by racism and antisemitism. A mutual enrichment between forms? If anyone thinks so, just read the Catholic internet.

That people are in pain and wondering about the future, and the spiritual lives of their children? I get it. I don’t doubt it. But the internet varieties of those folks don’t read me, don’t trust me, and don’t think much of the close examination of liturgy here. Clearly, I have nothing to say to that crowd.

Todd lives in Minnesota, serving a Catholic parish as a lay minister.
View all posts by catholicsensibility →
This entry was posted in bishops, Traditionis Custodes. Bookmark the permalink.