Posted on 27 November 2021 by catholicsensibility

When the fam watches movies, my expectations are sometimes low. Like at Christmastime when there’s some Hallmark variation on a five minute attraction that gets stretched out to two hours of viewing time or to the end of the Christmas pageant or holiday bake-off or deadline to sell the family tree farm.

I didn’t have high hopes the other night when my wife asked me what I wanted to see and I responded, “Something fluffy.” So the stream produced Inlawfully Yours. It sounded like the young miss and I could generate a few laughs, and it had them.

The premise is Jessie, a NYC woman, helping her widowed mother-in-law pack up and get the small-town ancestral family home ready for sale. One pre-funeral complication: the husband having an affair with someone labelled in the credits as “sweet young thing.” Literally. Hence, a lot of awkward relationships, and a divorce in progress.

Jessie tries to get her mother-in-law out of the house, suggesting they go to church. Naomi demurs, and the non-religious daughter-in-law protests, “I’m not going churching alone. They’d burn me at the stake.” From here, the religion angle plays out fairly sensibly and respectfully. 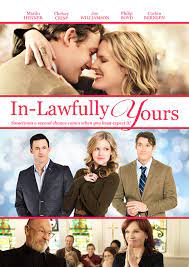 Jessie has a habit of raising questions during the sermon, and the pastor is patient. “Oh good. An easy one,” is his response to the one true religion question. The church board decides to steer their newbie into child care. A brief scene of discussing Noah’s Ark in terms of predatory biology and genocide lead to the whole group of children interrupting the “grown-ups” to ask questions. Would you put a skeptic in charge of CLW at your parish? I doubt I’d recommend it. Church attendance, which had dropped in recent years, began to swell. Why? Maybe a small town thing, and people might have wanted to see how the question thing would play out? More miraculous swells have happened in the history of Christendom, so I wouldn’t totally discount.

Conflict comes between the minister and his board–you can guess which side is in favor of parable of the lost sheep and which isn’t. That bit plays out with something of a ham fist. But the delightful sub-plot is that Jessie begins to find faith, despite her cynicism about life’s bad deals, being chased out of town by a smooth-talking ex’s machinations, and doubts about her romantic interest not removing his wedding band six years after his wife’s death. Her character progresses from mis-pronouncing Job, from being surprised that bible study in a home is actually “a thing,” to having an awareness of what the Gospel teaches. Her moment of realization, imaged above, is back in NYC. The filmmaker’s external shot is St Patrick’s cathedral, but the interior is just a small chapel-sized place. Jessie yells at God. She is counselled and encouraged by a priest. She returns to her new home to find love and meaning in life.

The whole thing is rather contrived, and it settles well enough into its genre. It also strikes me as a gesture of wishfulness on the part of the filmmakers. Or is it wistfulness? If only churches welcomed newcomers. If only they answered the questions honestly, and with good humor. If only busybodies could get a come-to-Jesus moment. If only Christians found a reason to be joyful and hospitable and open, the churches would fill up again, like the last scene in the movie, where participatory gospel music (even led by a small choir), and “open mic” has become a thing, three years later.

I was trying to describe this movie to a friend, and when I mentioned that last bit, she responded that it sounded sort of like the synod process we’ve been going through and will continue in the next two years.

I’ll continue to watch for religion in streaming movies. I don’t always find it, but when I do I want to pay attention to how it is presented.

Todd lives in Minnesota, serving a Catholic parish as a lay minister.
View all posts by catholicsensibility →
This entry was posted in evangelization, film. Bookmark the permalink.