Posted on 9 December 2021 by catholicsensibility 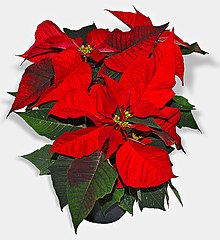 Everywhere you turn, you find another item to blow up a Catholic ex-senator’s intemperate and ignorant comment from some months ago:

I sure hope the Santorum household is getting holiday mileage out of conifers at the family homestead. Those trees are native across the world, not just in the Americas. As for the red (or white) leafed Christmas favorite, the Aztecs first used the plant they called cuetlaxochitl as a source for red dye and also used it as a medicinal to treat fever.

I saw something in social media the other day advocating we learn the native pronunciation. Joel Roberts Poinsett, the guy who introduced them to the US from Mexico in the 19th century, supposedly had a racist tinge about him.

I wonder: maybe Rick Santorum has gone all racism woke on us and will enjoy his roast beef and yorkshire pudding rather than roast turkey and potatoes for his holiday dinners.

Todd lives in Minnesota, serving a Catholic parish as a lay minister.
View all posts by catholicsensibility →
This entry was posted in Christmas, Commentary, Politics. Bookmark the permalink.