Posted on 16 January 2022 by catholicsensibility

Months of Traditionis Custodes continue to simmer for many Catholics. I noticed an op-ed at CWR titled, “The spiritual capital punishment of faithful Catholics.” 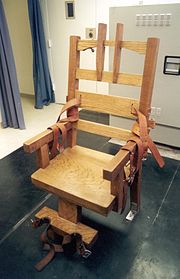 The Vatican action is the equivalent of spiritual capital punishment. It not only willfully marginalizes faithful Catholics devoted to the Extraordinary Form (EF), but it also places a wedge between the celebration of the Mass and segments of Sacred Tradition by eliminating the complementarity of the Ordinary and Extraordinary Forms.

Equivalence seems to really stretch the point. I have no doubt TC and its aftermath are extraordinarily painful for devotees of the Traditional Latin Mass. Capital punishment is designed to be painless, at least in theory.

I find myself somewhat like a person under a death sentence, awaiting news of when his sentence will be carried out.

Unless one has ministered to death row persons, I’m not sure there’s a real thing here. From the perspective of a lay person, maybe I can assist.

I’ve served parishes through the replacement of a pastor. One incoming guy from a few decades ago openly mused about me, “I don’t know what you do here.” Strange, that. We’d been through a sequence of eight Christmas Eve/Midnight/Day Masses where I got to run the gamut of overseeing the set-up of the school auditorium, to unlocking the church before the crack of Christmas dawn, to closing up shop at 1:30 in the afternoon. Oh, and directing a few music groups or mc’ing when we had an organist and needed some direction with servers. But he had an associate pastor and visiting chums to help with Masses. I didn’t know what he was doing when he wasn’t presiding at Mass, but that wasn’t a concern. He was a pro, and he did his job well. Except for the HR part of it. I confess I did get a nice shout out after Easter Vigil Communion my last year, but I was busy helping the sacristan and tending to a sick altar server so missed most of that.

When it was time to move on from this parish, it was hardly a death sentence. My wife and young daughter coped well, so it was a task and a chore to get a household on the road and settled in a new place. But the team pulled through.

If TLM advocates read carefully TC and the Q&A from last month, and monitored the most vociferous of the websites, they would read why people are clamping down on the 1570/1962 Missal. Subjectively, one can opine that the strain on unity isn’t that bad. But then I was reading comments on the links above, and on the facebook post from St John Cantius, Chicago. The latter where “faithful” Catholics are calling out the parish leadership and stating their determination to go to schismatic churches and worse, withhold donations.

I read through comments again, and I’m struck that some Catholics aren’t just in a time warp for their preferred form of worship. The Church is still beset with 70s music, felt banners, and bad catechesis. If only people weren’t stupid, some muse.

I think disappointment is a feature of life in the mortal realm. One or the other of my singers this morning struggled with one aspect or another. A good soprano was home sick. A fine tenor was exposed to the virus and was also home, isolating. Timing was a chore on the psalm. Someone who wasn’t at rehearsal needed a reminder or two on some things. It was far from the ideal I’d prefer. But it wasn’t a death sentence.

Even the pandemic wasn’t and isn’t a death sentence, at least in terms of music and liturgy. For some millions of human beings in the world, it was an actual dying.

I explained here what the disappointments in the liturgical life have meant to me. They haven’t been atom bombs, lethal injections, or even the worried waiting for the hammer of unemployment to drop. I think my TLM sisters and brothers really don’t give a flying fig about that. Much of what I’ve seen written strikes me as more self-absorbed. And concerned about family and closest friends. Unfortunately, the internet age reinforces groupings of people who think alike. It sinks notions of compassion.

The reasons for TC are well-stated and obvious. As a subjective point, I think one can disagree with the methodology. But the objective truth is that the liberal permission given for the TLM hasn’t calmed Catholics or erased our most agitated differences. There is no real confusion. Disagreement is not confusion.

Todd lives in Minnesota, serving a Catholic parish as a lay minister.
View all posts by catholicsensibility →
This entry was posted in Liturgy, Traditionis Custodes. Bookmark the permalink.