On The Tube: More Star Trek

Posted on 5 May 2022 by catholicsensibility 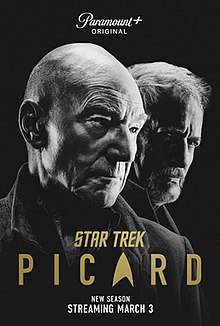 One season wraps up as another series begins. The second of three Picard seasons comes to a merciful and tattered ending. I commented on another social media platform, “What a relief!”

Good characters and acting, visuals deserving of a Star Trek series, but to be brutally honest: the writers have no clue how to tell what has amounted to a seven-hour movie.

My beef isn’t so much a violation of my science fiction prime directive: change one future thing and then let good characters loose in the universe. The new Star Trek streaming efforts, Discovery and Picard, have tried to force a lot of narrative together that doesn’t really connect. What they could have done was read the few really great long sf novels–Dune, for example. See how a character changes and how supporting players are swept up in big events. They could’ve written a novel, but what they’ve tried to do instead is improvise a ten-part single episode that’s about 70% fluff and nonsense.

Many commentators have said that Star Trek is best with an adventure-of-the-week format. Tried and true, perhaps. But people keep writing television in that way and it’s still popular. Even Isaac Asimov’s Foundation series works well with that. The original compilation was five short stories glued together in one binding. Gradually the stories got longer–two each in books two and three. The last four novels in the series, two prequels and two sequels, were each single stories, and debatably, not as good/popular/successful as the older tales.

Not every writer is a JRR Tolkien who can churn out a 1300-page masterpiece the publisher will chop into three books. Maybe the Star Trek braintrust shouldn’t try. What they have tried with Strange New Worlds–and that seems to work pretty good so far–is the adventure-of-the-week format–just like the original series and the Next Generation effort.

So, a familiar feel to the new show. An explorer may chafe, but with a palette like science fiction, why not save the exploration for the topics of the episodes? The good thing about that is that if a particular storyline is a bomb, there’s always next week hoping for better. When the serialized adventures turn sour, what do we do? Wait a year for the next one?

Final grade on Picard: C-minus. The new show’s first episode gets an A.