Posted on 8 May 2022 by catholicsensibility 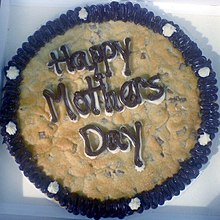 Inevitably, a day like Mother’s Day invites the occasional complaint. I remember one person in a parish long ago who seemed desperate to be a mother. She was middle-aged and not married. She also objected to the Mother’s Day blessing that the pastor prayed annually.

I listened to her complaint, but I couldn’t see suspending the practice because some women were excluded. More poignant was the woman who had lost a child. Clearly, she wasn’t going to be a recipient of a card, present, and meal in honor of a role she once held. Does the pain get bad enough that one would skip church on Mother’s Day? I’m sure some people do it.

The tendency in churches I’ve served is a fairly wide inclusivity. Today’s blessing I heard mentioned “mothers, grandmothers, godmothers, foster mothers, and adoptive mothers.” When I’ve written it, I’ve sometimes keystroked “those who have been mother figures to us.” Or some such wording.

Who are mother figures? Teachers, mentors, neighbors, music or dance directors and such? A man can do all this too. Is Mother’s Day also open to female persons of leadership? I can’t speak for mothers, but as a father, I don’t mind sharing my third Sunday in June with guys who have been father figures. The more, the better. The world can’t have too many moms and dads.

On the other hand, Jennifer Roback Morse and others would like to clamp down on a wider view of who might be a mother. The headline at NCReg is “Happy Birthing Person’s Day?! Seriously?” I’m aware the term has poked up in a government document, but I don’t think it’s hit the rounds in the folded cardboard aisle. And besides, if a person has given birth but later, for genetic, psychological, or even a misguided reason envisions themselves as non-binary or even male, what’s the problem with giving them a Mother’s Day, should they so desire it? Or change the name of the holiday however they want to define it?

Who determines who gets a Mother’s Day? I think it’s easy: the person who views another person as a mother or mother figure. If a person can tell another, “You’ve been a great mom to me, biological or otherwise,” that’s certainly enough for the day. Have a happy one.

Todd lives in Minnesota, serving a Catholic parish as a lay minister.
View all posts by catholicsensibility →
This entry was posted in Church News, Commentary. Bookmark the permalink.