Posted on 20 June 2022 by catholicsensibility

As the years pass, it gets harder to find interesting bits of metal in pocket change. Recently, my wife ran across a wartime nickel, top left. She saved it for me because it looked “old.”

It does look old, but notice the color difference compared to a similar older nickel. Wartime nickels were minted 1942-45, and the silver content–a sliver over one-third, makes them liable to tarnish. The design featured an enlarged the mint mark and moved it to a hovering position over Monticello.

The US government wanted to save nickel for the war effort, so the story goes. Each coin is mostly copper, but to keep the same weight, a dash of manganese was added to the recipe. These coins are slightly magnetic.

The large P, D, or S also made it easier for the government to pull these coins from post-war circulation, in case it wanted to recover some of the precious metal in a future meltdown. I think collectors have likely hoarded a good number of them too. 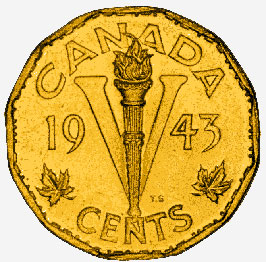 Canada had a different solution for its nickels. In 1942-43, the 5-cent piece north of the border was made out of brass. The familiar beaver was replaced with the victory symbol in the year of issue, right. The final two years of the war found the Canadian mint using chromium-plated steel.

Those coins are also easily identifiable in a mix to a careful eye–they have a bluish tint to the gray. Unfortunately, these pieces have a tendency to corrode once the chromium begin to wear off the steel interior.

Todd lives in Minnesota, serving a Catholic parish as a lay minister.
View all posts by catholicsensibility →
This entry was posted in coins. Bookmark the permalink.