M1: The Crab in the Bull

Posted on 19 August 2022 by catholicsensibility 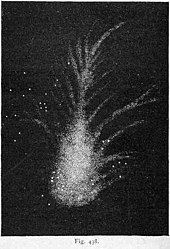 In 1842, William Parsons, Earl of Rosse aimed his fine telescope at the constellation of Taurus the bull. He drew a deep sky object he viewed there. Would you say it looks like a crab, left? I’d say a silverfish, but then I’m not a British aristocrat dining on fine foods. Charles Messier didn’t see a crab. He just attached the number one to this body.

When I was in the Astronomy 112 lab, we compared early twentieth century photographs of the Crab Nebula to the latest ones. It was obvious to us undergraduates the nebula was expanding. If one knows approximately how far away it is, one can calculate the speed of expansion of its elements.

Check the shifting image below. Different space telescopes see five different views depending on the wavelength. Red is what it looks like in radio waves. Yellow is infrared, what the Webb telescope will see (though this isn’t a Webb contribution). Green is visible light; blue ultraviolet, and purple is gamma radiation. Interesting, eh?

How did this nebula originate? Supernova, 1054 AD. The Chinese skywatchers noticed it. Jocelyn Bell discovered the remnant of that star in the 1960s–a pulsar.

Is it just a pretty object? Actually, it has helped astronomers understand better a few objects in our solar system. The sun has passed in front of the Crab, permitting scientists to see what happens when radio waves filter through the solar corona. When Saturn’s moon Titan slipped between Earth and this nebula in 2003, researchers learned its atmosphere was over five-hundred miles deep.

While Doctor Who has encountered the Crab Nebula a few times over the … years, there is a more significant piece of fiction that features M1, Murray Leinster’s fine novelette “First Contact.” The nebula doesn’t really feature except as a backdrop for some interesting ideas–a success at understanding alien language and a clever solution for a situation of trust or suspicion for two ship’s captains.

Todd lives in Minnesota, serving a Catholic parish as a lay minister.
View all posts by catholicsensibility →
This entry was posted in Astronomy, science fiction. Bookmark the permalink.