Posted on 25 September 2020 by catholicsensibility

The Lectionary for ritual Pastoral Care of the Sick includes a reading that is also included in the Lectionary for the Order of Christian Funerals, with six verses selected from the fifth chapter of St. Paul’s second letter/epistle to the Corinthians. 2:

We know that if our earthly dwelling,
a tent, should be destroyed,
we have a building from God,
a dwelling not made with hands,
eternal in heaven.

So we are always courageous,
although we know that while we are at home in the body
we are away from the Lord,
for we walk by faith, not by sight.

Yet we are courageous,
and we would rather leave the body
and go home to the Lord.
Therefore, we aspire to please him,
whether we are at home or away.
For we must all appear before the judgment seat of Christ,
so that each one may receive recompense,
according to what (she or) he did in the body,
whether good or evil. 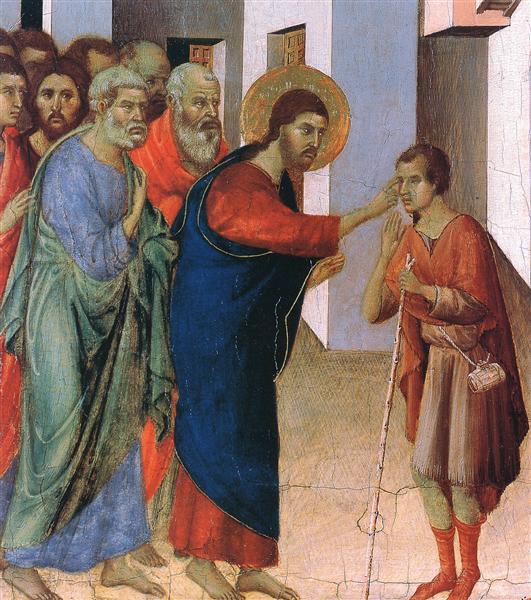 One would hope the context of pastoral of the sick differs from the context of a funeral. Indeed, Hope is the foundation of the reading, and the reason for its inclusion in both ritual contexts, as the Courage to which these verses refer is ultimately anchored by
Hope. While a traditional symbol of Hope is an anchor, Hope is dynamic rather than
static, being instinctively aspiring with an open hand and heart to clasp the hand and
heart of God wherever and whenever God finds us. The fundamental disposition of the
hopeful is to be radically open to surprise. In the words of Charles Péguy, a French poet
and essayist of mystical politics of a century ago,

If we walk by Faith, in the words of St. Paul in this reading, our journey’s direction is
ruddered by Hope. Amid tumult, we may or may not be granted signal graces to discern
terse if sometimes baffling kind of angelic guidance, such as: “Not here.” “Not yet.”
“Over there.” “Now.” “Go.” “Notice.” “Behold.”

In the context of sickness, what has not yet been and what will be may be a
manifestation of God’s providential will for . . . healing and recovery . . . or for
something else. What we know is commonly just part of the truth and we feel our way
through the fog of illness in Hope. We are not promised that our illness will be healed in
the ways we expect. We don’t get to pick apart and sort the threads of the tapestry of the
experience of illness into the terrible and sublime like tares and wheat: they come with
each other. We are only promised that we are not ultimately overcome if we allow God’s
kingdom to be done, and align our wills with God’s will to be done. In the words of the
late medieval English mystic, Julian of Norwich:

While lack of evidence may make it seem that God’s will is hidden, the sacraments and
sacramentals used in the pastoral care of the sick are not magick; they are not an art of
conjuring hidden knowledge or power. The ritual is devoid of Industrial Light & Magic
movie moments or superficial Shazam shots (Whiz Comics #2, Feb. 1940).

Rather, they are a way of accompanying people on a journey consummately pre-figured
by Jesus of Nazareth, who in the very ritual of pastoral care is himself accompanying
people, beheld through the ritual and loving accompaniment by his body of ministers
and disciples joining with the sick person. While the manifestation of God’s providential
will may be mysterious, the accompaniment is not.

What is the journey of the sick? Illness is not abnormal, but part of the human
condition. There are at least two things that all of us share in common: entering this
world and leaving it. The commonality of those two things is a foundation for social
solidarity. And journeying through illness can partake of the hopefulness and
faithfulness of the journeying to which God called Abraham and Sarah, Scripture’s
paradigmatic pilgrim people. Such a pilgrimage calls us to be ready for surprises, to be
prepared to let go of what is transient in order to keep our spiritual eyes on the prize, the
full manifestation is what has not yet been and what will be, and invites us to cultivate
virtues of Hope, Courage and Faith.

Yet, it is not only God who surprises. In some sense, Hope offers a mutual dance of surprise. While God is omniscient, mystical appreciation for God can understand our pilgrimage as an opportunity for God to delight in being surprised by our free choice of
hopefulness and persistence in love in spite of everything that conspires against them, whether that be illness, persecution, spiritual dryness and dark nights of the soul/senses, or something else. In the concluding words of Ron Hansen’s acclaimed novella, Mariette in Ecstasy (E. Burlingame Books (1991)), about a young early 20th century nun who is suffering the Passion of Jesus in the form of stigmata:

“And Christ still sends me roses. We try to be formed and held and kept by him, but instead he offers us freedom. And now when I try to know his will, his kindness floods me, his great love overwhelms me, and I hear him whisper, Surprise me.”

The chosen verses from 2 Corinthians may be taken as a distillation of themes
expanded upon elsewhere in Scripture. For example, in the almost lyrical 11th chapter of
the Letter to the Hebrews, which may be considered its kith and kin, we read how Faith
is preceded by Hope, and leads beyond what is promised to something even better:

“Faith is the realization of what is hoped for and evidence of things not seen. . . . Abraham obeyed when he was called to go out to a place that he was to receive as an inheritance; he went out, not knowing where he was to go. By faith he sojourned in the promised land as in a foreign country, dwelling in tents with Isaac and Jacob, heirs of the same promise; for he was looking forward to the city with foundations, whose architect and maker is God. . . . All these died in faith. They did not receive what had been promised but saw it and greeted it from afar and acknowledged themselves to be strangers and aliens on earth, for those who speak thus show that they are seeking a homeland. If they had been thinking of the land from which they had come, they would have had opportunity to return. But now they desire a better homeland, a heavenly one. . . . Yet all these, though approved because of their faith, did not receive what had been promised. God had foreseen something better for us, so that without us they should not be made perfect.” (emphases added)

Considering that the chosen verses from 2 Corinthians used to be part of the very first
epistle of the Sundays of Lent, one might reconsider Lent as an extended ritual season of
pastoral care for the spiritually sick. Turning towards God in Hope and Faith is part of
that care. That direction will lead us to and through the Upper Room, Gethsemane,
Calvary, the Tomb, . . . and beyond. While the journey is often lonely in our senses, it is a
journey all disciples of Jesus are called to take up. As he did for us. Not just to restore
the promise of Original Goodness, but to divinized glorification.

In the post-conciliar Lectionary for the Mass, the paradigmatic Lenten story of illness
and healing is that of the healing of the man born blind from the ninth chapter of the
Gospel of St. John, used on the Fourth Sunday of Lent for the ritual second scrutiny of
catechumens preparing for the sacraments of initiation at the Easter Vigil. The man
born blind receives a surprise: a healing, without even begging Jesus for it. The man is
not merely restored to his original state of being in this world, but brought into a greater
state than he had ever experienced. He doesn’t pretend to comprehend this
transformation entirely, but the experience transforms him so much that he is given an
even greater gift of grace: belief. This healing is commonly reckoned as the sixth of seven
signs in the course of Jesus’ public ministry recollected in that Gospel, which concludes
with a message for everyone seeking healing and transformation of any kind:

“Now Jesus did many other signs in the presence of his disciples that are not written in this book. But these are written that you may come to believe that Jesus is the Messiah, the Son of God, and that through this belief you may have life in his name.” (emphases added)

For an in-depth treatment of the Pastoral Care rites, check this page that outlines our examination from a decade ago.

Todd lives in Minnesota, serving a Catholic parish as a lay minister.
View all posts by catholicsensibility →
This entry was posted in Guest Writers, Liam, Pastoral Care of the Sick, Scripture. Bookmark the permalink.