Posted on 27 April 2021 by catholicsensibility 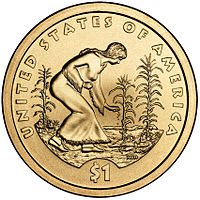 I was noting some headlines involving Rick Santorum’s quote:

Some commentators were saying this was racist. I’m not inclined to tag Mr Santorum with that label, but I would wonder about his diet. I am concerned his Thanksgiving table is strange indeed.

This list is not exhaustive, but it hits the high points. To be sure, Europeans raided American farms in the 16th century and adopted some of these back home.

I suspect food isn’t the only contribution of Native Americans to this hemisphere’s culture, but it’s a big one. If there are deniers out there, read up and eat.

The top image is from a recent US dollar coin showing a woman cultivating the traditional Three Sisters. As for the other image, subtract everything but the glass of wine and the candle, and you pretty much have Santorum fare on the fourth Thursday of November. Bon appetit, culture deniers.

Todd lives in Minnesota, serving a Catholic parish as a lay minister.
View all posts by catholicsensibility →
This entry was posted in Commentary, Food, Politics. Bookmark the permalink.

2 Responses to The Rick Santorum Diet