Posted on 7 June 2021 by catholicsensibility 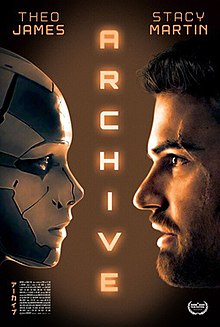 Resting at home from a medical procedure today. Once assured I was feeling fine, if fatigued, and after a mid-afternoon nap, my wife departed. Time for a science fiction movie (that she would probably dislike.)

Archive looked like the most interesting of the options. It seems like every year this century several robot/artificial intelligence movies get released. Most aren’t appealing–takeoffs on the scary presentation of all-powerful, all-metal, inhuman beings that might just take over someday.

In this film, it’s the near-future and a roboticist is working on a personal project while he’s supposed to be doing something for a corporation. His corporate boss doesn’t seem too pleased with his seeming lack of progress on something. Unbeknownst to her, he’s working on self-aware robots with personalities. In flashback, we get his backstory: a beloved wife who, post-death, has had her awareness downloaded into a computer where widower and dead spouse can work out their “final affairs” before she degrades in the storage medium. So the task is downloading his wife into a robot. “J3” is the third effort and the second prototype gets jealous.

As the narrative progresses, one might wonder if this is a creepy thing like killing the wife in this remote location to make the technological leap. Then more flashbacks inform the viewer of an automobile accident which explains the death and the scars on the scientist’s face and neck.

There’s some mysterious goings-on: breaches in security, a robot “suicide,” technological saboteurs it seems, and eventually an intervention from the boss. I did not envision a very twisty surprise ending.

The plotting was excellent. Clues abound, but the writer-director, Gavin Rothery, keeps the viewer guessing and wondering up till the very end. Recommended viewing.

It does make one wonder: do self-aware artificial intelligences have morals and ethics? Will they, once they are created?–and I do think someday we will achieve some sort of interactive non-human intellects to engage in conversation, tasks, and projects. What does that mean for their interaction with religion and faith?

Todd lives in Minnesota, serving a Catholic parish as a lay minister.
View all posts by catholicsensibility →
This entry was posted in film, science fiction. Bookmark the permalink.