Posted on 30 June 2014 by catholicsensibility

Britain’s new venerable, Frances Taylor, was a nurse, author, editor, Anglican-turned-Catholic, and as one might surmise, the founder of a religious community. Link here to a recent Catholic Herald feature.

Frances was born to an Anglican family with high church sensibilities. Two of her sisters entered an Anglican religious order. Frances followed them, at least as a visitor. She felt called to serve wounded soldiers in the Crimean War. That conflict, a disaster on all sides for 1850’s Europe, did bring Florence Nightingale and a more effective nursing presence to the battlefield 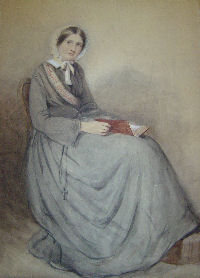 as the combination of new weaponry and incompetent leadership left thousands to suffer and die on modern battlefields.

Frances was deeply moved by the bravery of Irish soldiers and the Sisters of Mercy who nursed them. She consulted a Jesuit or two (whom else?) and became a Roman Catholic in April 1855.

She authored a book on her wartime experiences, deeply critical of what she saw in Russia. She also made a strong appeal for better health care for her country’s poor and needy.

Continuing to write novels and serve as a literary editor, Frances explored the possibility of a religious vocation. Late in the 1860’s, she established an English branch of a rural Polish order, the Little Servant Sisters of the Immaculate Conception. Proposed adaptations to fit the more industrialized Britain were vetoed, so the solution seemed to be to found another order entirely: the Congregation of the Poor Servants of the Mother of God.

The apostolate covered some typically Jesuit domains, including the rescuing of girls and young women from prostitution. The new order also visited the poor in their homes and offered nursing services to the needy where they lived.

Frances Taylor died in 1900, a revered figure in her homeland.

Todd lives in the Pacific Northwest, serving a Catholic parish as a lay minister.
View all posts by catholicsensibility →
This entry was posted in Saints, Two Weeks of Worthy Women. Bookmark the permalink.