Posted on 26 December 2010 by catholicsensibility

This is not a commercial to buy science fiction books. Just some thoughts. 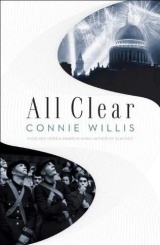 Connie Willis’ publisher came out with part two of her enormous tome Blackout/All Clear a few months ago. This one story about time travellers in 1940 Britain was split into two separate 600-page books. I was looking forward to this “series” as I was for her brilliant novel The Doomsday Book. If you haven’t read the old book, don’t read the new one/s yet. Read her award-winning 1992 novel instead.

Ms Willis put a massive amount of research into Blackout/All Clear. It would have been a better effort as a single novel with judicious editing. I admit I got impatient, but I was hooked enough on the characters and the premise that I skipped more quickly over the middle sections of each book to get to the goodies.

Connie Willis is a fantastic author. Her short stories on the Blitz, first novel Lincoln’s Dreams, and The Doomsday Book–all brilliant, as I’ve mentioned above. She teases with some great bits in this new novel. Have the time travellers from 2060 really changed history and are the Germans really rolling up the Thames? Did that guy really die? Why is she revealing the ending, if it really is the ending? The twists and turns keep coming, and don’t get resolved until the very last pages. It’s a very satisfying beginning and resolution. Too much detail in between. Too bad; this story could have been as great as the other works of this author.

I read Ian McDonald’s The Dervish House, a tale of near-future Istanbul. It’s “accidental” science fiction in the sense that it’s mainly about economics in the guise of a thriller.

That said, I enjoyed the book. Except for the situation of the young boy, who supposedly has such a fragile heart condition that loud noises can kill him. His parents plug his ears. Problem solved, right?

Um, sound is transmitted through the air and through solids. There’s no ear to heart connection on this one. If a loud noise, like a bomb going off, is near this kid, he’ll feel it through walls and the sound waves travelling from his room into his chest, and boom.

The best science fiction book of this lot was another economic tale, The Windup Girl. Except that it was also post-apocalyptic, with a manageable helping of genetics. Paolo Bacigalupi’s first novel is an immensely satisfying read. Everybody is pretty much a bad guy, and perhaps not so much the title character who suffers inhuman degradation and persecution. But she’s one of the last people standing at novel’s end.

Like McDonald, Bacigalupi is looking to the Third World for his setting of future humanity. Makes sense.

In all of these books, I imagine where the religious sensibility fits. What would I be doing in these novels? Little enough religion in either of the last two novels here. Most sf authors just don’t have a handle on real religion to write about it. Or it’s been buried for other concerns.

While I prefer space opera, I do enjoy a well-written earthbound tale. If you have time or inclination for only one sf novel, read the latter of these three/four.

2 Responses to Some Books